Were The Pyramids Built With Poured Concrete Or Rocks?

The Pyramids at Giza in Egypt were constructed between 2550 and 2490 BC – that’s over 4500 years ago –  and are the oldest of the ancient Wonders of the World still standing today. As feats of engineering, given the technology available at the time, they are probably unparalleled in human history.

When we think about how they might have been built, we tend to bring to mind images of thousands of slaves hauling huge blocks of rock, while being ‘encouraged’ in their labours by overseers cracking whips. It’s probably an image remembered from classic movies.

However, that image is based on how many experts believe the pyramids were in fact constructed – although the most recent archaeological evidence suggests that the work was done by skilled, paid craftsmen rather than slaves. Nevertheless, the generally accepted theory is that the blocks were transported up the Nile, dragged to the site and raised into place using ramps and levers.

The earliest known account we have also suggests this is how it was done, although it should be remembered that Herodotus was writing in the 5th century BC, roughly 2000 years after the events in question.

One outlier among the many competing theories originated in the 1970s with a French chemist named Joseph Davidovits, who has suggested that it is far more likely that the blocks were cast on site out of locally sourced limestone.

Archaeologists have scorned the idea, but it has gained increasing support from scientists, who have been able to demonstrate that the means and materials would indeed have been available at the time. Local limestone is particularly fragile, and if you soak it in water it can be easily disaggregated. If you mix the resulting slurry with what were readily available and regularly used materials, such as kaolin clay, silt and natron (sodium carbonate), and then pour it into wooden moulds, it would eventually harden to cement the limestone aggregates into uniform cast blocks. 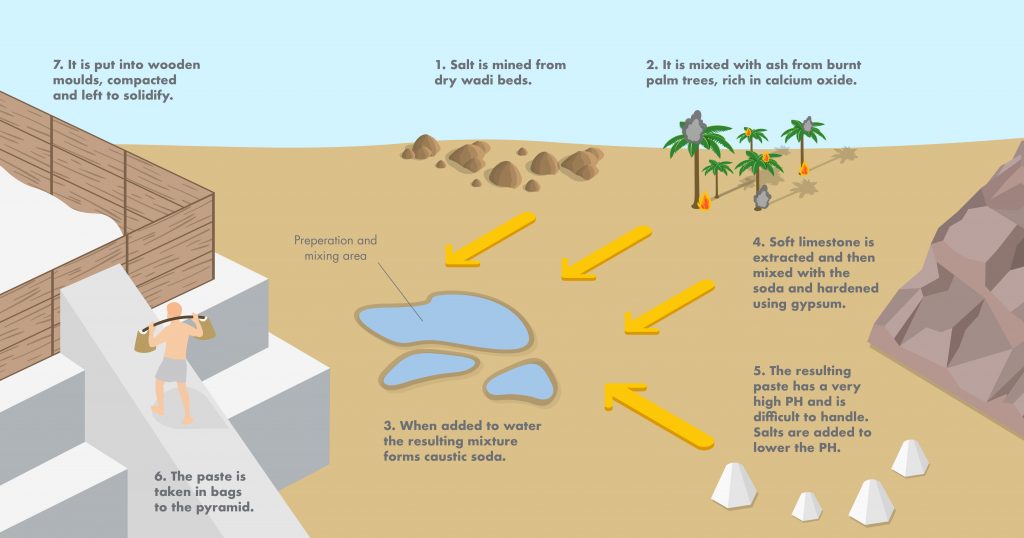 Experiments carried out at the Massachusetts Institute of Technology in 2008 demonstrated the feasibility of Davidovits’ theory. The professor in charge of the project equated the wet state of the material as being rather like Silly Putty, and had one distinct advantage in that it didn’t shrink as it hardened.

Meanwhile, Professors Gilles Hug and Michel Barsoum analysed small traces from the pyramids and discovered “traces of a rapid chemical reaction which did not allow natural crystallisation… The reaction would be inexplicable if the stones were quarried, but perfectly comprehensible if one accepts that they were cast like concrete”. They think that this poured concrete method was only used on the top levels of the pyramids, however.

A further piece of evidence can be found at the pyramid of Meidum, about 62 miles south of Cairo, where a wooden beam has been found sticking out of a wall. Naturally, this could only have happened if the material into which it set was something akin to concrete. The theory is that these beams, not dissimilar to modern railway sleepers, were used to form the structures around and into which the concrete was poured.

The Great Pyramid of Wickford?

If we were to consider building something like the pyramids today – and even better to do it somewhere in Essex rather than the Egyptian desert, so that the team at Neil Sullivan could get involved – we would certainly favour the poured concrete method over the more laborious alternative, although we would recommend the use of volumetric concrete and a concrete pump to make the job considerably quicker and easier.

Previous: How To Repair Concrete Drives & Paths
Next: Why & How to Use a Concrete Calculator