To be sure that your concrete is fresh and ready to be used, and you’ve not received or created a batch of poor quality concrete, you can conduct a number of tests. Here, the team at Neil Sullivan & Sons will detail what those tests are and how they work. 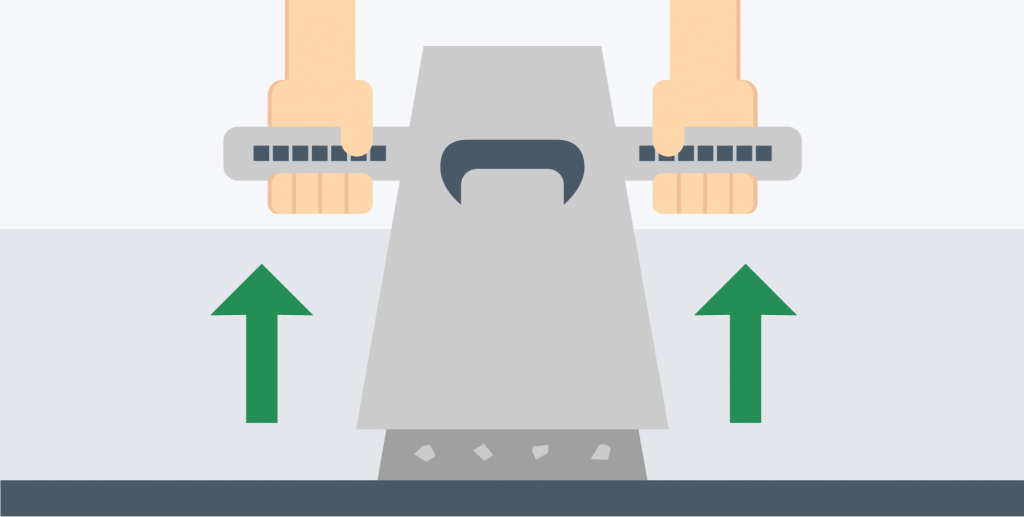 As well as checking freshness, this test can also be used to ensure the right amount of water has been added to the mix.

This method uses a steel ‘slump’ cone. The cone needs to be placed atop a solid base, and then it is filled with fresh concrete in three equal parts. Each of the parts is rodded 25 times, ensuring the concrete is compacted properly. When each layer has been rodded and the top layer has been levelled off, the cone is lifted up, leaving the concrete in a free-standing form with a slight ‘slump’. 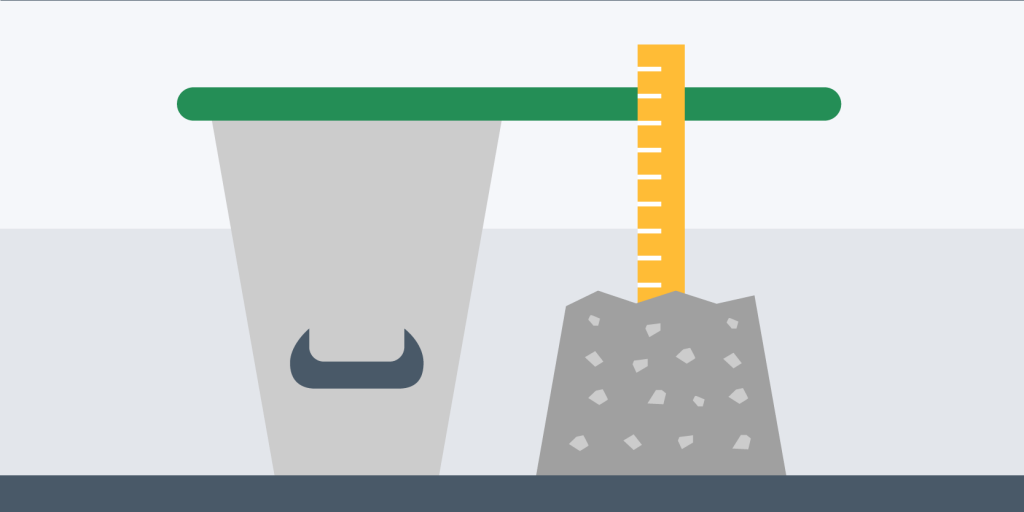 This test is done to assess the workability of concrete. The ‘factor’ is the ratio of weights across the varieties of concrete – from partially to fully compacted. The test uses a hand scoop, trowels, a steel rod and a balance.

The concrete is placed in the uppermost of two hoppers (situated above a cylinder) and levelled off at the brim.

The door at the bottom of the upper hopper is opened, and the concrete falls into the lower hopper, with any concrete sticking to the sides to be pushed with the rod.

The lower hopper is then opened and the concrete falls into the cylinder, where it is levelled off again.

The cylinder will be cleaned on the outside and then weighed to the nearest 10g – this is the weight of the partially compacted concrete.

The cylinder is emptied and then refilled with concrete that is fully compacted into the space, rather than just being allowed to fall in. The cylinder is weighed, giving the weight of the compacted concrete. 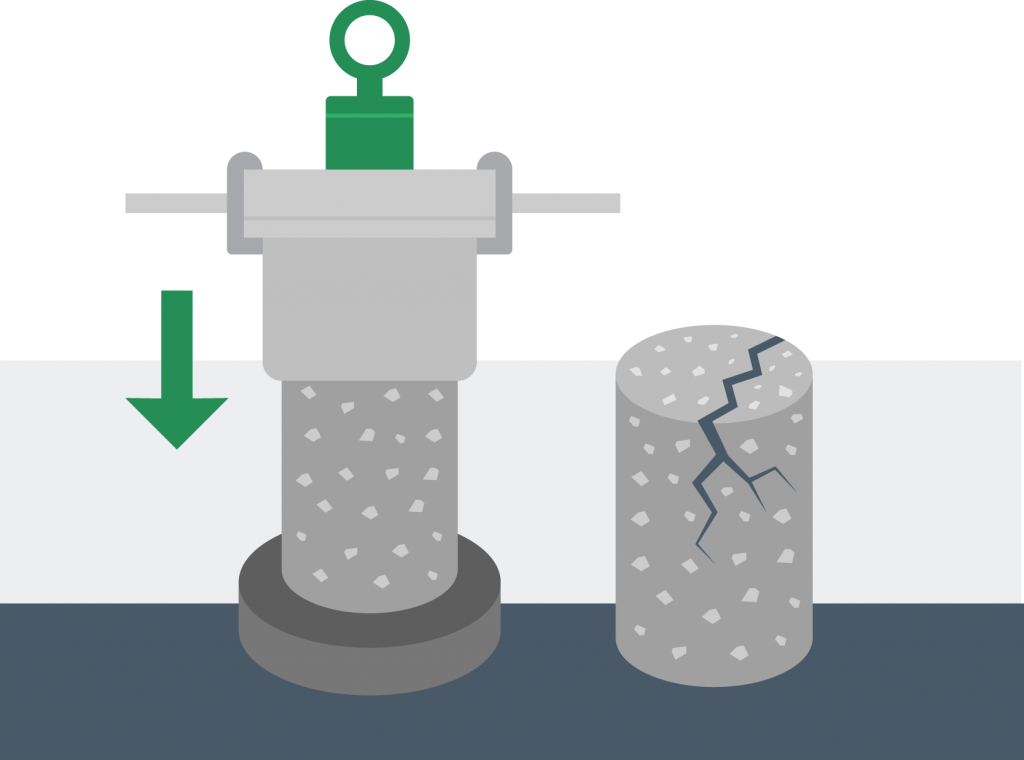 The concrete is moulded into cubes or cylinders and left to set/cure by being stored  at 15°c to 25°c if the testing date is in 7 days or more, and stored between 18°c and 22°c if the testing date is less than 7 days ahead. The cube or cylinder is then placed in a compression testing machine, and subjected to uniaxial compression. The resulting cracks are then studied to see how pressure affects the concrete. 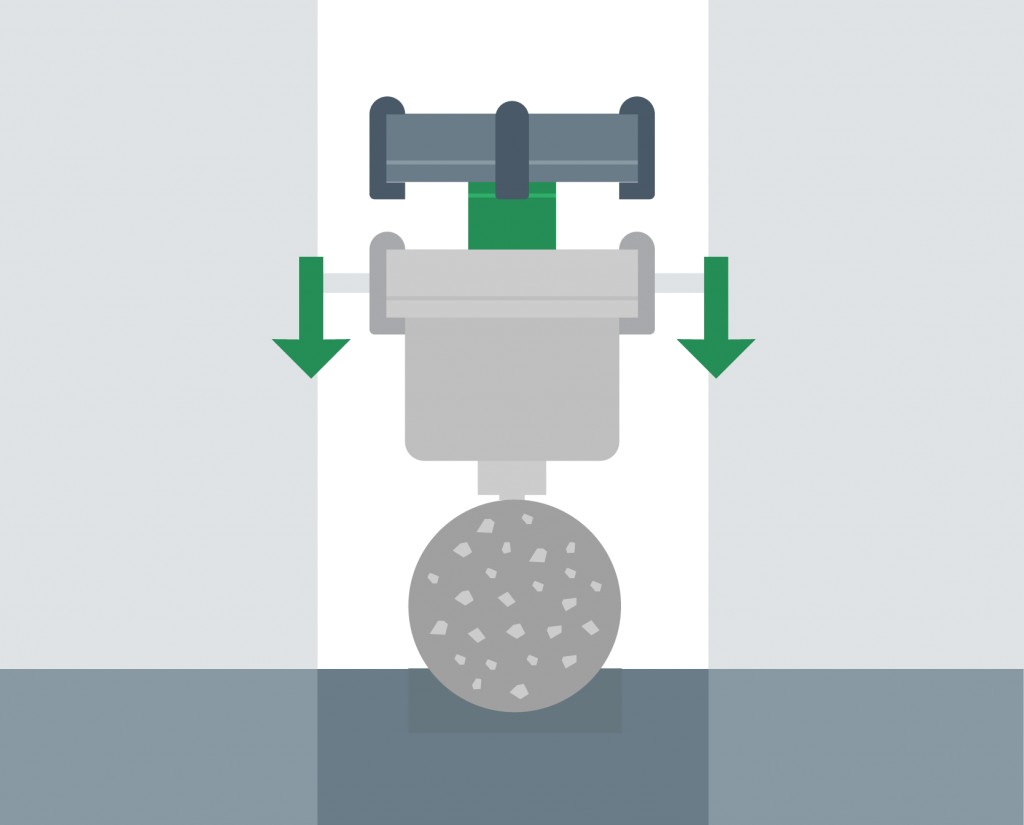 There are two common types of test to assess the flexural strength of concrete. The first is a three point bending test, whereby a sample of concrete is placed horizontally across two points with nothing supporting the middle. Force is then applied to the top of the sample in the middle through a single point, so it bends in a V-shape.

The second test is a 4 point test. It is very similar to the three point version, but the force is applied at two points, rather than one, which means the sample will bend to a U-shape. The four point test is generally thought to be more effective at highlighting the sample’s defects, whereas the three point is used for assessing specific locations.

Neil Sullivan & Sons only supply the finest concrete to clients across the Essex area. From domestic driveways to commercial building foundations, no job is too big for us and we’re always keen for a new challenge. For more information about what we do, please get in touch with us today.